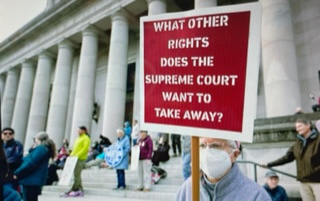 Article by the Editors of the Blue View

The Democratic Party of Virginia Chairwoman Susan Swecker has issued a statement in response to recent reports that the Supreme Court is poised to overturn the landmark Roe v. Wade decision establishing a woman’s right to an abortion. (Those reports are based on a recently leaked Supreme Court draft majority opinion written by Justice Alito regarding the currently pending Dobbs v. Jackson Women’s Health Organization case.)
“This report showing the Supreme Court will overturn Roe v. Wade is beyond concerning and will set women’s rights back decades,” stated Swecker. “Over 49 years ago, Roe v. Wade established a woman’s constitutional right to make decisions about her own health and body,” she noted.
The change will turn back the clock, allowing states to criminalize abortion. That brings the battle home to each state.
“Virginia Democrats are deeply committed to protecting Virginians’ right to an abortion,” said Swecker.
“We will fight every single effort put forward by Governor Youngkin and Republican leadership to criminalize abortion and will ensure that Virginians have access to the health care and reproductive health care they need.”
Key to those efforts will be retaking the majority in the Virginia House of Delegates in the next election.
“Politicians have no place in medical decisions. Overturning Roe v. Wade would not end abortion in our country, but it would add to the inequality and disparity of care in our country,” says Bryan Graham, chair of the Fairfax County Democratic Committee. “Republicans are out to traumatize grieving families with investigations into miscarriages. They want to force rape victims to be burdened with forced pregnancy. In some places, they are looking to criminalize the use of any contraceptives. We cannot let the clocks be turned back on our rights,” he says.
He encourages everyone to get involved. “There are many ways to help out and make a difference,” he says. (To learn more, go to the FCDC web site (https://www.fairfaxdemocrats.org)
“And when we retake the majority here in Virginia, we will enshrine the protections of Roe v. Wade into our constitution,” Swecker concludes.