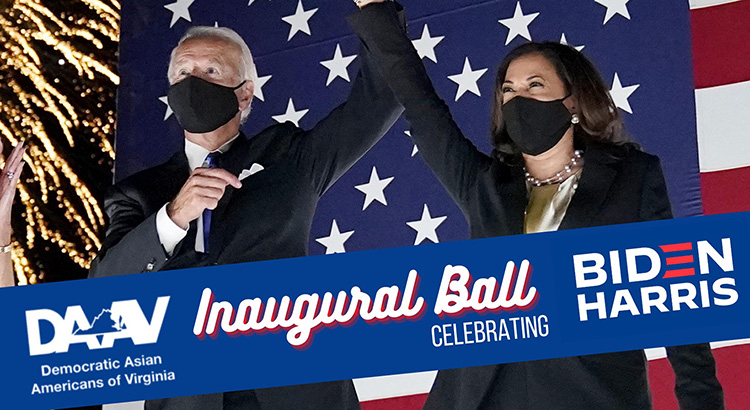 1. Do you know what percentage of Asian American and Pacific Islander (AAPI) households in Virginia speak another language in their home?

2. Which of the following groups has the largest population in Virginia?

These questions were presented to the attendees at the Democratic Asian Americans of Virginia (DAAV) Inauguration Ball and were not only educational but filled the room with laughter and excitement. For answers to these questions, please go to the bottom of the article. Shyamali Hauth, the first Vice Chair, researched and delivered the questions to the participants.

On January 17, 2021, DAAV held its first socially distant Inaugural ball via Zoom to celebrate the election of President Joseph R. Biden and the Vice President Kamala Harris.  Moreover, it was a historic celebration of Harris, the first woman of Asian and African American heritage.

DAAV Chair Praveen Meyyan said: “We had a historic victory this November and AAPIs (Asian American and Pacific Islanders) were truly the margin of victory. Our volunteers in Virginia made contact with 63,517 AAPI households in the Commonwealth with thousands of calls made, texts sent, and doors knocked (safely!). They helped contact voters in the swing states of Pennsylvania, North Carolina, Wisconsin and Nevada. Even after the election, our volunteers and activists helped make hundreds of calls and send over 1,200 postcards into Georgia for the special election which flipped the Senate to Democratic control. Forming close to 8% of Virginia’s population, the AAPI community was instrumental in turning out the vote and ensuring a Democratic Trifecta in Washington. We’re proud to have helped elect Joe Biden and our first Asian and African-American Vice President Kamala Harris!”

“It’s a historic day on many levels,” said former DAAV Chair Dewita Soeharjono about the 2021 Inauguration. “We wanted to celebrate this special day by hosting an event to honor the inauguration of President Joe Biden and Vice President Kamala Harris with something fun, educational and that showcases our cultural heritage.”

If you would like to join DAAV, please contact Manisha Singh at daavevents@gmail.com or at DAAV Membership Form 2021 (google.com).

Reese Espy Glassman attended the Inauguration. She is the former Legislative Director of the U.S. Committee for Refugees and Immigrants and Staff Director for the Committee on International Relations on Capitol Hill. She lived in Nepal while working for USAID handling democracy and governance.