A district court judge has blocked, for now, a gut-punch delivered by the Trump administration to federal workers in the form of a trio of harsh executive orders  (read them here, here and here).

With one in nine local jobs directly attributable to Federal employment, no other workforce the country was more heavily impacted by these anti-worker executive orders than that of Washington, D.C. and its Northern Virginia and Maryland suburbs. 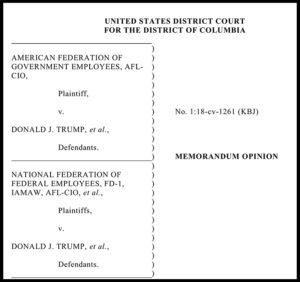 The American Federation of Government Employees with a coalition of other Federal employee unions filed suit in U.S. District Court to block implementation of Trump’s orders, arguing that they violated the Constitution, Federal law, and decades of past practice. On August 25, District Court judge Ketanji Brown Jackson largely agreed with the unions in a 119-page opinion .While Judge Brown forestalled the worst damage from the executive orders, the Trump Administration is expected to appeal her ruling.

If the Trump executive orders had been allowed to stand, so-called “permissive subjects” could no longer be discussed in contract negotiations, even with consent of management. Prohibition of bargaining over permissive subjects would deprive employees of a voice on such important matters as job training, work schedules, overtime, telework and accommodations for workers with disabilities. Even worse, design and scope of grievance and arbitration procedures would largely be removed from collective bargaining, virtually ending the ability of employees to contest arbitrary, unfair discipline or firing.

One executive order took aim at “official time,” long a Republican punching bag. “Official time” is the paid time of Federal employees who serve as union representatives, for the hours they spend on contract negotiations, representing co-workers, and other activities jointly agreed to by the union and agency management.  Time spent on internal union business like organizing or union elections is specifically excluded from official time. The statute authorizing official time has been on the books since 1978. Trump’s executive order imposed severe limits on official time, in the aggregate and for individual Federal employees, and also restricted the activities for which it could be paid.

Trump’s executive order on “Removal Procedures” made Federal employment more precarious, rolling back job protections put in place to shield employees from the “spoils system” that pre-dated the modern civil service. This  threat to an apolitical civil service dedicated to the public interest is the last thing our nation needs at the present historical juncture.

Judge Jackson notes that “there is no dispute that the principal mission” of the cornerstone Federal sector labor law statute “is to protect the collective bargaining rights of federal workers, based on Congress’s clear and unequivocal finding that ‘labor organizations and collective bargaining in the civil service are in the public interest.’ 5 U.S.C. § 7101(a).”

If the Trump administration appeals, let us hope her ruling is upheld.

Sheldon Friedman is a recently-retired labor economist who lives in Springfield. He spent much of his career at the AFL-CIO Economic Research Dept. He chaired the Federal Prevailing Rate Advisory Committee at OPM during the Obama administration.