Two charts (see below) reveal the striking differences: poverty declined an average of 1.4% per year during the Democratic administrations of Bill Clinton and Barack Obama, while poverty actually increased 1.5% per year when Republicans Ronald Reagan and George Bush senior and junior were in power. 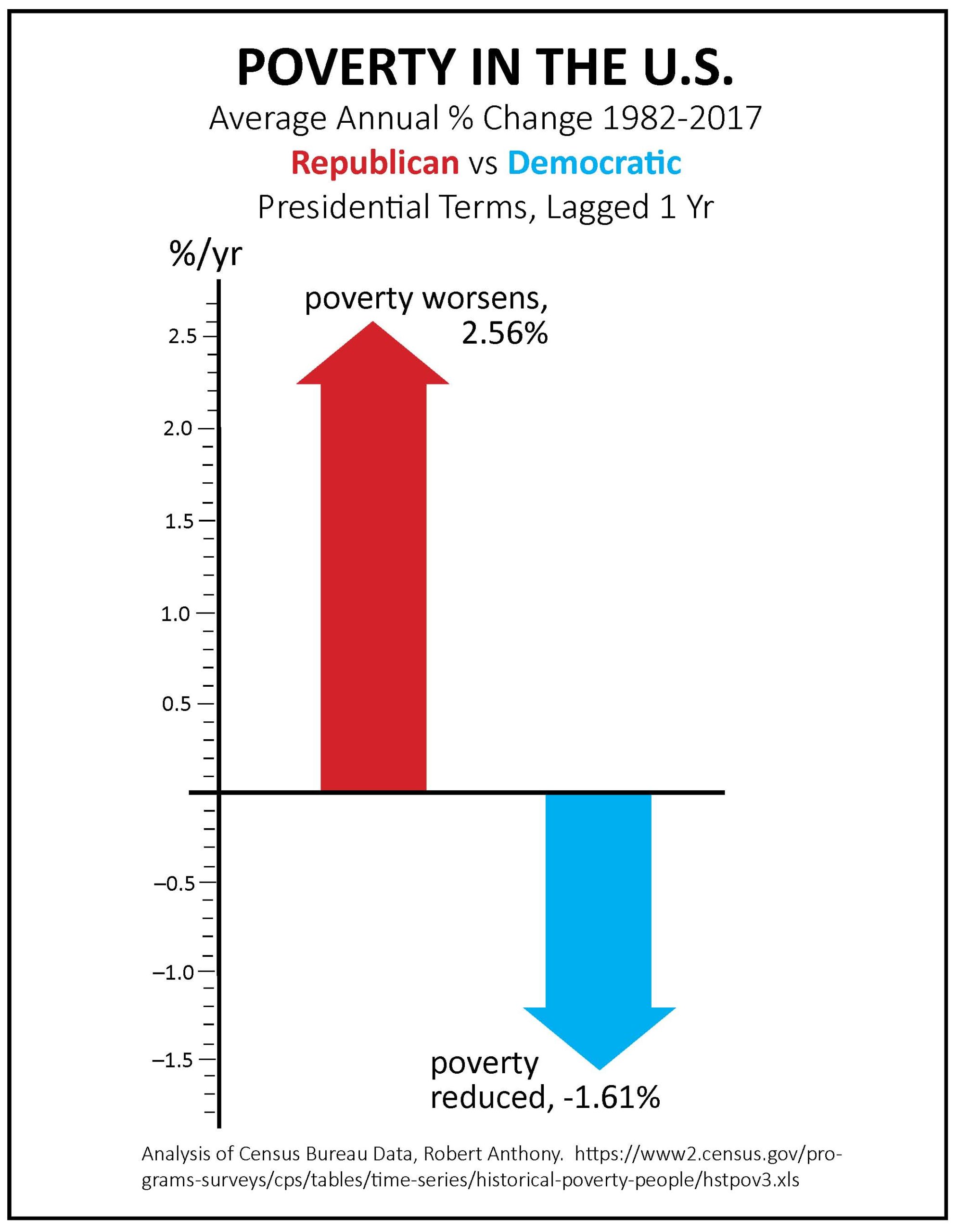 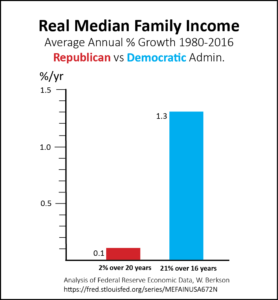 Overall, in the 36 years since the introduction of Reaganomics, those remaining on the lower 70% of the income ladder have experienced income stagnation or, at the bottom, income declines. Meanwhile, the upper middle class have continued to experience healthy growth in their incomes, and for the super rich, incomes have skyrocketed.

What accounts for these stark disparities?  An important factor is that Democrats raised taxes and invested the revenues in infrastructure during this period, while Republicans did the opposite.

America used to believe in the power of public investments, funded by higher taxes on the wealthy. And they were right to do so.

In the years 1954 through 1968, before Republican President Richard Nixon began to cut back public programs, top tax rates were never below 75%, and investments in core infrastructure, health and education as a percentage of GDP were around 50% higher than in recent times.

The consequence? Yearly growth in real median family wages was on average 3%, 30 times the growth under Republicans since Reagan, and more than double Democrats’ increases in the recent period.

The War on Poverty led by Democratic President Lyndon Johnson also dramatically demonstrated the power of public investments to reduce poverty by bringing the poverty rate down from 23%, when the campaign started in 1964, to 14% in 1969, before Nixon’s cuts.

History tells us that demagogues are often successful in appealing to bigotry during times of economic distress, when voters resent being left behind economically, and search for scapegoats among minorities and foreigners. Although there is no evidence of immigrants since Reagan having any significant negative impact on wages, we see such scapegoating today.

Ironically, although Republican policies have led to economic stagnation and poverty increase, a Republican demagogue has been able to turn bigotry to his advantage. We need to reverse this dynamic and let middle class voters know who can better serve their interests, and those of the country.

William Berkson is a member of Hunter Mill District Democratic Committee and chair of Herndon Reston Indivisible’s Economics Committee. A PhD in Philosophy, he is author of four recent articles on political economy in Washington Monthly